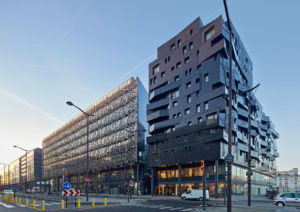 The T8 block is one of the major works in the development of the Paris Rive Gauche ZAC. It is located at the crossroads of Avenue de France and Rue de Tolbiac – two major axes of the district – and opposite the accesses to the Library François-Mitterrand station of line 14 of the metro. It is also located on the edge of the ZAC, in direct connection with the 13th “historic” district.

The entire project is located above the railroad tracks coming from Austerlitz station. The work began in 2009-2010 with the covering of the tracks. The cranes were installed in 2011 and the raising of the walls started in November of the same year. The complex was completed in June 2013 and the services of the city of Paris were able to move there in mid-2014 after partitioning the offices.